A recent study in Hungary discovered that dogs’ brains react to human voices as well as emotional sounds like laughing or crying. 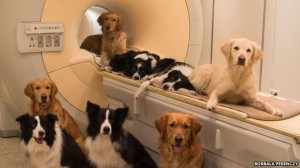 uring scans, while a variety of sounds were played for them. Twenty-two human volunteers performed the same task.

Researcher Attila Andics, from the Comparative Ethology Research Group at the Hungarian Academy of Sciences, stated, “The location (of the activity) in the dog brain is very similar to where we found it in the human brain. The fact that we found these areas exist at all in the dog brain at all is a surprise – it is the first time we have seen this in a non-primate.”

Perhaps even more interesting is the discovery that emotionally charged dog sounds – such as whimpering or angry barking – caused a similar reaction in both humans and canines (although dogs had a bigger response).

Humans’ and dogs’ evolutionary paths have been closely intertwined for thousands of years, so it’s not surprising to us that we’ve developed similar responses to each other. We’re truly BFFs!

Disclosure: Some links on this site are “affiliate links” for which we will receive an affiliate commission or complimentary products. Regardless, we only recommend products or services we use personally and believe will benefit our readers.